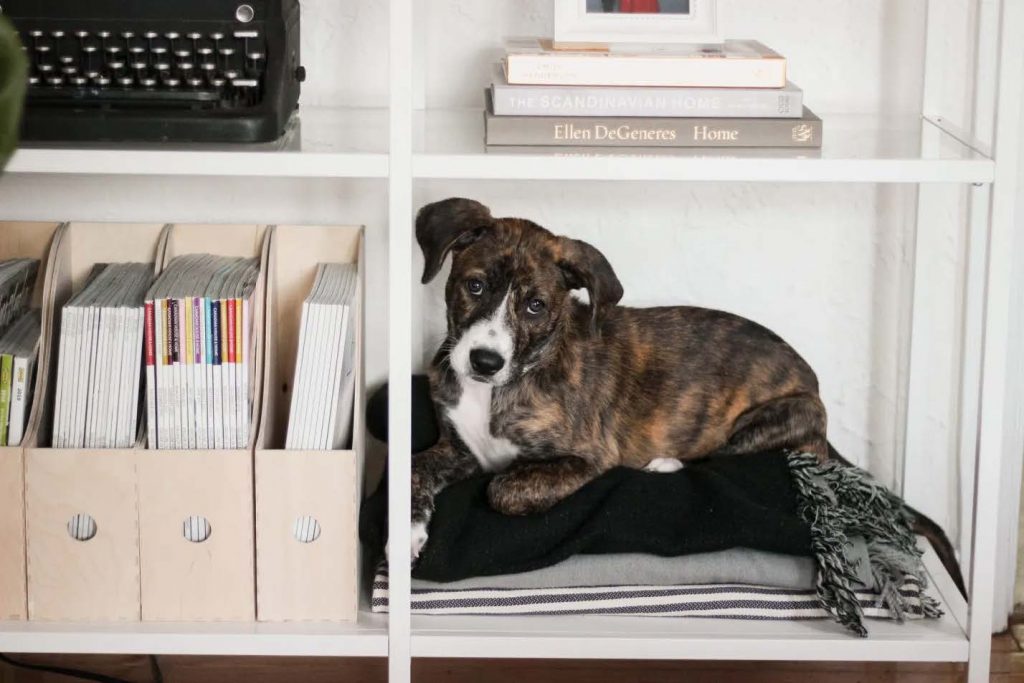 We have a new family member! This is our new little 12-week old potcake puppy, Westley. Now that the shock of owning a puppy has worn off a little bit, I’m finally in a place to sit down and think about everything that has changed since we welcomed this sweet little ball of energy into our home.

Westley came to us from Nassau, the Bahamas through a potcake rescue shelter! We first heard of the shelter from our friend Kenny who adopted his little guy, Chandler, in February. When we finally met Chandler, we knew this was the “breed” for us! He was playful, friendly, and easy-going — exactly what we were looking for in a dog.

Potcake is the name used for mixed-breed dogs from the Caribbean Islands. The locals used to feed the dogs the overcooked rice remnants caked to the bottom of pots which gave the dogs their name: potcake! Most potcakes have a similar physique, but the colouring really varies from dog to dog. We picked Westley from his litter because of his gorgeous brindle colouring and sweet white paws — I love that he always looks like he’s wearing slippers.

This specific shelter in Nassau has volunteers fly puppies up to Toronto while they’re still small enough to fly in the cabin and then the pups are adopted all across Canada.

When did we decide to adopt him?

Westley’s adoption story is pretty hectic. We started talking to the shelter via email a couple of months ago and followed their Facebook page to keep an eye on all of the new puppies “just in case”. We probably had our application in at the beginning of May and figured that we might have a puppy by the end of the summer.

When we were in England with my family (more on this adventure later), we received an email from the shelter on a Thursday night regarding a little boy pup who was growing so fast that they had to fly him up to Toronto as soon as possible.

The shelter arranged for Westley to fly to Toronto with a volunteer on Monday, and Adam’s parents met them at the airport to take care of him for a night while they waited for us to fly back to Canada. We flew into Toronto the next day from London and met our new puppy at the airport!

As amazing as it was for the timing of all of our flights to work out, the hand-off to me was really stressful because Adam stayed in Toronto and I had to take our little 10 – week old puppy alone on the flight to Halifax that evening. We barely had 10 minutes to meet him before I had to run back into the terminal for my flight to Halifax. Thankfully, the staff at Pearson were used to scared puppies and totally helped me get through security and my flight without any incidents. By the time we got home, it was 3:00 a.m. and I’d already been up for 24 hours! He ran around the house like crazy and I think we both only had two hours of sleep that night.

Settling in with a new puppy

Three weeks in and I’m finally feeling good about our routine. Westley is such a smart little guy who loves learning tricks! We’re actually running out of things to teach him! He loves meeting new people and gives gentle kisses to strangers on the street. He sleeps through the night, every night and barely has any accidents. He loves snuggling up with us on the couch (we had the best nap with him yesterday) and he’s already following Adam around like a little shadow.

He’s definitely a playful puppy and is very mouthy at times, but he’s getting a lot better at listening to our commands. We’ve definitely noticed that he acts up when he’s tired and as soon as he gets snappy we’ve been putting him in the crate for a nap — he always wakes up nice and calm!

Westley has already had his first vet visit and met some puppies yesterday at the Jolly Tails puppy social! It was so nice watching him interact with other puppies! He was a little shy at first but was racing and tumbling around in no time. The whole afternoon was so exhausting that we all needed a nap — it’s definitely not easy parenting a puppy for the first time! I speak for both of us when I say that I wouldn’t wish single puppy parenting on anyone.

Are we crazy for adopting a puppy on our way home from a month-long vacation? Definitely.

Were we prepared at all for having a new puppy in the house? Absolutely not.

Has it been worth it so far? Yes, yes and yes; a million times over.

My name is Rowan and I’m a Holistic Interior Decorator and Writer. I live by the ocean in Halifax, Nova Scotia in a sweet Cape Cod style home. I believe that designing a home is a journey, not a destination.

END_OF_DOCUMENT_TOKEN_TO_BE_REPLACED

Rowan Morrissy Studios is located on sacred land that has been the site of human activity for over 12,000 years. We are in Mi’kma’ki, the ancestral and unceded territory of the Mi’kmaq People, and we acknowledge them as the past, present, and future caretakers of this land.